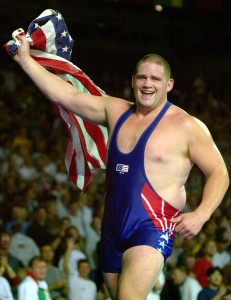 FILE – In this Sept. 27, 2000, file photo, USA’s Rulon Gardner waves the American flag following his gold medal win against three-time Olympic gold medalist Alexandre Kareline, of Russia, in the Greco-Roman 130 kg final wrestling match at the Summer Games in Sydney. Gardner’s epic upset of Russian wrestling great Alexander Karelin in 2000 remains one of the most compelling moments of the modern Olympics. Starting in 2020, youngsters looking to Gardner and Karelin for inspiration won’t have a chance to excel on the sport’s biggest stage. Gardner and nearly everyone else associated with the sport in the U.S. were jolted Tuesday, Feb. 12, 2013 when International Olympic Committee leaders dropped wrestling from the Summer Games. (AP Photo/Katsumi Kasahara, File)