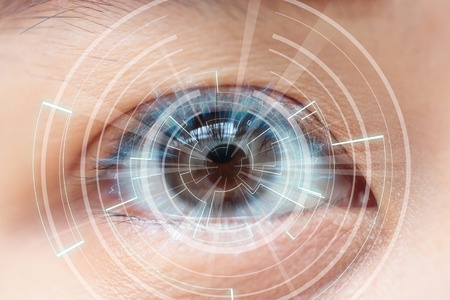 It sounds like something out of a science fiction story, but the news that a new bionic lens is on the horizon is true.

Dr. Garth Webb, the scientist behind this new lens says that it can increase a person’s clear vision by 300%. Basically if you can see something and read the details at 100ft, you’ll soon be able to see it at 300ft.

This is startling to say the least but there’s real science behind it and clinical trials are starting soon. Dr. Webb’s new lens allows for long distance and short distance site thus removing the need for corrective lenses like contacts and eyeglasses. The procedure so far only takes about 8 minutes at that. Imagine, being able to walk into a doctor’s office and 8 minutes later being able to see like Superman.

It’s called the Ocumetrics Bionic Lens. The lens is surgically inserted into the eye much like today’s cataracts surgery. Dr. Webb even has his own corporation and is the CEO of Ocumetrics Technology Corp. and has spent years and millions of dollars doing the science, research, and application of this technology. He’s got the patents and is building a facility in Delta, B.C. (British Columbia). That being said, Dr. Webb is raring to go and expects that if there’s no stonewalling by regulators, the lenses and technique will be on the market in a few years.

The implications are enormous. People aged 25 and older are eligible for the surgery as by that age their eyes are fully developed. Military could use them in combat and daily operations making accuracy and efficiency in safety increase a thousand fold to say the least.

People who play sports could benefit as well and let’s not forget pilots and truckers who could use this enhancement to safely look for trouble in the skies and down the road. The average person would benefit the most with this lens. Everyday tasks could be done more safely and efficiently, parents could keep an eye out for their kids better and teachers could too. Police officers and firefighters as well as rescue personnel would be 300 times more efficient.

Just think of the lifeguard at the local pool or beach being able to see 3 times as better thus spotting trouble before it occurs. Talking about water, divers could increase their vision and find items, detect trouble, and other amazing things.

Dr. Webb has had his technology looked at by professionals in the field. At the American Society of Cataract and Refractive Surgery, industry leaders attended a meeting to look over Dr. Webb’s bionic lens and found the data highly promising. Most of the surgeons attending will attempt to do clinical trials in their countries as well.

Of course at first, there was skepticism regarding the bionic lens, but after studying the science, the top surgeons realized there is something there. As they progress through their research the process may get streamlined or even improved.

The first tests will be done on animals and humans who are blind. The first thing to see is if sight is restored, how well, and if any complications arise over time. When the clinical trials are done, it will then be available for application in humans on a general basis. Surgeons around the world will have to learn how to do the technique and of course overall costs will come into play.

It shouldn’t be more expensive than today’s cataracts surgery so the adjustment may be relatively minor. It’s just a matter of time before these lenses are out on the market and we may see changes in human life like never before.

Author Bio: Tony Rollan provides consulting services to VSI (http://www.patternless.com). He is an author of many articles on all types of optical, ophthalmic equipment and alternative medicine.