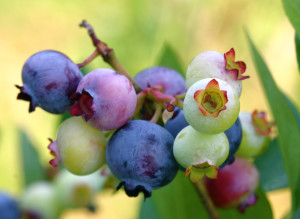 Those whom are growing older, fear, or believe to currently be suffering from memory loss—Dementia in particular—could benefit from daily consumption of blueberries over the course of 3 to 4 months. For those over the age of 68 in a University of Cincinnati study, memory and practical thinking skills, as well as previously known terms, all increased or were seemingly ‘super powered’ by this super fruit.

In general, individuals that consume 1 cup of blueberries per day demonstrate improved health, ability to retain information in some cases, and specifically benefit from such a healthy diet choice in the case of neurological impairment or illness—such as Dementia. Individuals within the test Cincinnati University group in particular–over 100 individuals–were given various placebos, such as fish oil, water, vitamins, and even blueberry powder. In comparison, those that had consumed natural blueberries (1 cup) everyday day showed a great capacity to restore their neurological functionality, reverse, and even potentially fight off neurobiological degenerative diseases.

Unfortunately, while it’s not wholly known why those whom consumed the blueberry powder did not yield as equally or comparable and desirable results with memory and brain functioning, it is speculated that perhaps certain health oriented variables weren’t taken into consideration, such as the inclination, genetically, for some test-subjects to even experience neurological degenerative disease, while others just simply did not suffer such difficulties, while others did that actually consumed the blueberry fruits on a daily basis throughout the course of this study. Likewise, it’s worth appreciating and considering the value of adding other antioxidant rich fruits or vegetables to your diet for the sake of improving your health—and even restoring neurological functioning or preventing illness based around such. Cranberries are a perfect example of such, and in turn demonstrate the strong value of fruits but specifically berries in general in terms of contributing to you feeling healthier!

The antioxidant found in Blueberries, known as anthocyanins, has been proven time and time again in scientific studies to improve not only cognitive functioning, but also overall health. These antioxidants and other nutrients found inside of blueberries greatly improve one’s health, offer “cleaner” blood, a more capable mind, and the ability to fight off many neurological degenerative diseases.

Like some specialized fruits like cranberries, raspberries, and blueberries, antioxidants such as anthocyanins and others especially contribute to positive health, growth, and can even increase positive brain functioning levels—in turn reducing stress, improving sense of wellness, and ultimately promoting a higher likelihood that individuals will consider, research, and follow other dietary and nutrition based improvements for the sake of their health.

While continued research is definitely the most practical and necessary for further understanding the nutritional or health benefits of blueberries, continued research and experimentation on lab-animals have demonstrated repeatedly that such a fruit and antioxidant can be beneficial to brain growth, regeneration, and other difficulties often regardless of age. It is however, of course, quite difficult to equate the age of a lab mouse or rat to define how that age or number could carry over to a human-being in lieu of the effectiveness of blueberries as an antioxidant and health-beneficial fruit.