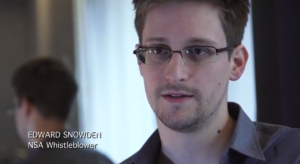 Edward Snowden disclosed his identity in an explosive interview with the Guardian, published on Sunday, which revealed he was a 29-year-old former technical assistant for the CIA and current employee of the defense contractor Booz Allen Hamilton.
Snowden worked at the National Security Agency for the past four years as an employee of various outside contractors, including Booz Allen and Dell.

In his interview, Snowden revealed himself as the source for a series of articles in the Guardian last week, which included disclosures of a wide-ranging secret court order that demanded Verizon pass to the NSA the details of phone calls related to millions of customers, and a huge NSA intelligence system called Prism, which collects data on intelligence targets from the systems of some of the biggest tech companies.
Source: http://www.guardian.co.uk/world/2013/jun/12/edward-snowden-us-extradition-fight