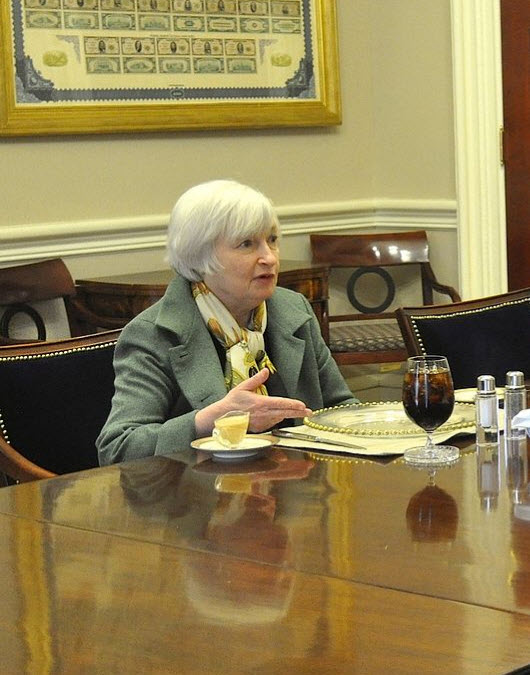 Recently at a question and answer lecture at Harvard University, Federal Reserve Chief Janet Yellen indicated both concern, as well as proposition to likely increase interest rates among banks, and potentially other federally funded programs or organizations in efforts to improve the American economy.

While Chief Yellen demonstrated with statistics that home-sales have dramatically improved since the 2008 “economic boom”, she points to a lack of continually developing labor-force, full-time job availability, and seemingly equates the two towards a need for increasing bank interest rates. It’s also worth noting that a “boom” or strengthening of home-sales through the overall American economy is likely associated with failure to sell, and a lack of overall market in which would otherwise be balanced at more fare, or profitable rates in home sales and other goods at a more stable, economic level across the United States.

Although many Americans in recent years have demonstrated an increased interest and faith in consumer-purchases, imported goods and aircraft-based materials, transportation, sales, exporting, and importing businesses appear to continually struggle.

Chief Yellen pointed out the recent drop in unemployment rates from 10% to 5%, however critics point out that increasing federal bank loans and reserve interest rates might inflict nearly instantaneous counterproductive results.

Even with the growth of nearly 3 million jobs in the past year alone, experts are weary as to the possible benefits in comparison to risk-ratio associated with increasing Federal Reserve interest rates.

Between recent economic decrease and disadvantages to job-growth, many politicians and critics alike claim that such a move might be premature, and cause more harm than good both in the short and long-term.

Although some economic growth can be seen as mentioned earlier through labor-employment, such wages are often lower or hardly meeting the mark of a median, American salary. This leads critics alike to believe that an “overnight influx” in Federal Reserve interest rates will be quite harmful, and will likely slide our economic-stability back a few years within a matter of days if enacted.

With inflation falling below 2% among the central bank system, politicians and leaders like Yellen might appear a bit nervous, impractical, or quick to impulsively try to trouble-shoot with various solutions unproven to likely work in any sort of long-term return, profitability, or economic sustainment.

Even in light of productivity growth at an average of 0.5%, this is not a promising statistic, and is also representative of poor living standards all the way across the society of the United States. A “knee-jerk” reaction of policy proposal or implementation such as this may be perceived as more of a damage-control like in nature proceed – as opposed to being realistically beneficial by any means beyond political standards.

In reality, without increasing the quality of living standards and available work, most might argue that inflating Federal Reserve interests will prove detrimental to the economy. Interest rates, as proven in the past, are by no means a solution of any kind to a lack of funding, borrowing, or unstable lending policies.

Many might propose that waiting for greater national to international labor growth and production exchange is a more practical route for addressing issues such as that within the Federal Reserve, a lack of paid loans or returns of interests, and an overall scheme in which represents a lower than desirable economic status for the American people to-date.