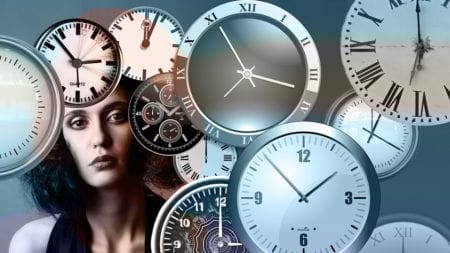 Trying to deal with all the cases and again do not have time? Do you feel like a squirrel in a wheel and complain that you do not have enough time? Then do not look at the clock, and, most importantly, think about the time management!

Tips for the proper use of time have turned into a large and highly profitable industry. However, more and more scientists declare that time management not only does not make our life better, but, on the contrary, only reduces its quality. Among them is well-known psychologist and business coach Tony Crabbee, whose services are regularly used by such world business leaders as Microsoft, HSBC and Disney. In his new book, Crabbe took a decisive offensive against time management. And speaking more broadly, and today’s principles of the relationship to time in general.

Referring to the work of the famous British historian Edward Palmer Thompson, the psychologist recalls that mankind was not always so concerned about hours and minutes. And yet some 250 years ago, watches seemed to be exclusively a luxury item. In addition, their accuracy was rather conditional, which, however, did not bother anyone. For centuries, mankind has been guided not so much by the time as by the need to solve specific problems. Of course, it is also necessary to plow and sow in the due time, but this period is determined not by hours and minutes, but rather by days.

The industrial revolution radically changed the situation. The work of the factories required the concerted efforts of hundreds of people. And then the account went for a minute or even a second. And with him came the era of worshiping the clock.

Today, this worship has reached an unprecedented and absolutely unjustified scope, Tony Crabbe is sure. He gives three main arguments against endless attempts to stretch his day for a few extra hours and shove as many things as possible into them.

1. Battle with the Lernaean Hydra
The main argument of time management is that, by learning to quickly manage your own affairs, you will free up more time for yourself. Crabbe categorically disagrees. He likens time management to a fight between Hercules and the Lernaean Hydra. This monster was different, scientifically speaking, a high ability to regenerate. And on the spot of each head, severed by Hercules, two new ones immediately grew up. This is exactly the case with time management, as well, writes Crabbe. We are freeing up time to immediately fill it with new business and make it as much as possible. And quickly coping with one task, we take for the next two. Probably also very important. That’s just to say that this approach raises the quality of our lives, alas, it is not necessary.

2. Confetti time
Equipped with the latest gadgets, we seem to ourselves to be mighty warriors armed to the teeth in a duel with time. Our smartphones and computers allow us to check mail at any time in any part of the globe, talk with customers, report to the authorities and take part in important discussions. With the help of these devices, we seem to cut life into the smallest segments that journalist Brigid Schulte wittily called “confetti of time” in her book.
However, in reality we “shred and grind” is not the time, but our own attention, the ability to focus on something important. We negotiate on the beach, instead of having a rest, and check the mail for dinner, instead of staying with the family. This psychotic mental activity psychologist Mihai Mihaly Csikszentmihalyi describes as “mental entropy”. It was Mihaly Csikszentmihalyi who described the state of the optimal mental experience, called the “flow”. The state of the flow is characterized by the complete dissolution of the person in the action being performed – and the loss of the idea of ​​the course of time. It can be work on a difficult task, or maybe a heart-to-heart conversation with friends, the essence of it does not change – the state of the flow is by definition impossible to achieve, every minute looking at the clock. And the more we turn our time into confetti, the further we find ourselves from the optimal state of our psyche.

3. Ghost Efficiency
To sacrifice one’s psychological well-being and quality of life for the sake of doing more things – ultimately, the personal choice of everyone. But the trouble is that even there is no such choice. The opportunity to be more effective and succeed in life due to time management – if not a myth, then the idea is at least outdated, Tony Crabbe believes. Referring to the research of many serious scientists, he shows: our obsession with a lot of cases and the truth helps us make more decisions. However, the solutions are the most obvious and far from always successful. For example, a professor at the Harvard Business School, Deepak Malhotra, argues that the distribution of attention to a multitude of tasks and concern over time limits reduces our ability to make right decisions. We prefer short-term gains – and often to the detriment of strategic interests.
And psychologists Michael Dedon and Heath Demari showed that a sense of lack of time negatively affects our ability to achieve the desired results. Damocles swords hour and minute hands simply do not allow us to show our abilities to the fullest.

Dictate watches played an important role in the history of mankind, radically changing the world. But we live already not even in the post-industrial, but in the information age. Time is no longer money. And it’s time to use other strategies: making a bet on a deeper understanding of the problems and a creative approach to their solution.