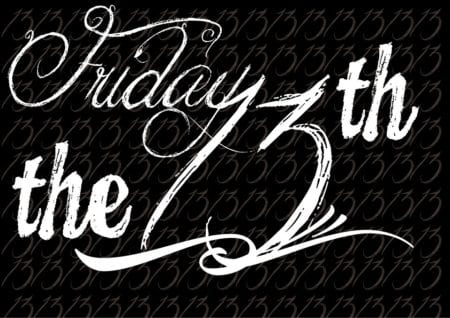 What are the signs and superstitions associated with this special eerie date?

In January 2017 – the first Friday, 13. The second and last such date will fall in October. From the phrase “Friday, the 13th” many people have frightening associations. And if you believe the statistics, about 60 million inhabitants of the Earth are afraid of it – and probably not in vain. Although scientists assure that this fear has no basis, the term in this phobia is quite scientific – paraskavedekatriaphobia. And although superstitious people try not to go anywhere that day, the number of accidents, air crashes and accidents on Friday the 13th increases by about 60%.

Fear of Friday, 13 has historical roots. Allegedly on this day, witches, ghouls and various evil spirits gathered, and Satan himself ruled the ball. It is also believed that it was on this day that Adam and Eve tasted the forbidden fruit, Cain killed Abel, and, after years, he killed Abel Cain and crucified Jesus.

On Friday, October 13, 1307, the French King Philip IV ordered the arrest of all members of the Knights Templar. Many were tortured and executed.

In addition, on May 13, 1988, the epidemic of the computer virus Jerusalem began, which was programmed for especially destructive actions, if activated on Friday the 13th.

WHAT NOT TO DO ON FRIDAY 13

1. You can not go on a trip, because such a road will be full of trouble.

2. There are many accidents on this day, so drivers should be especially careful at the wheel.

3. Do not go to the hospital or go to surgery – there may be bad consequences.

5. Plants planted on Friday the 13th will not grow and bear fruit.

6. It is believed that on this day it is forbidden to wash and to cut your nails.

7. It is not necessary to look for a job on this day or to go for an interview.

8. If a person’s funeral falls on that day, another death may be ruled out in the near future.

9. On this day fun, drinking, tasty food, laughter are prohibited. If you are having fun this day, you may experience unhappiness.

11. On this day not conduct important transactions or lend money.

13. That the bad omens are not fulfilled – go to church on that day.

14. Before going to bed on the night of Friday 13 you can not look in the mirror.

16. You can not stand under the stairs.

17. It is necessary to beware of black cats and empty buckets.

18. It is better not to wear brown or red clothes.

19. You can not dye your hair in reddish hues.

21. If you fall under the rain when you come home, do not open the umbrella in the apartment.

The terrible events and disasters that occurred on Friday 13