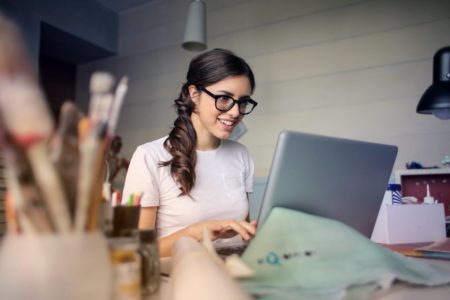 Millions of people around the world spend several hours a day at the computer. They often have problems with their eyesight. Eyes watering, burning, itching, and even pain, problems with clear vision appear. Are you sure the computer is the culprit?

Statistics show that up to 95 out of 100 people working at the computer have eye problems. Specialists wonder how much this is due to the impact of the device itself, which is a computer, and how much disrespect for its use and organization of work. What rules should be followed if you want to keep good eyesight for long?

How does the computer work on the eyes?
The computer emits relatively much heat, which not only increases the air temperature, but also reduces humidity. If we work many hours at the computer in a room with air conditioning, this leads to the so-called dry eye syndrome, which manifests itself through itching, burning, redness and eye pain. This is helped by air humidification and the use of drops, the so-called artificial tears.
Another threat to our eyes is the electrostatic field emitted by the computer. The face, like the screen, attracts charged dust particles, plant pollen, bacteria, molecules of chemicals etc. It can be the cause of allergic irritation and even eye inflammation. It is manifested by the swelling of the conjunctiva and eyelids, the gathering of secretions. It is accompanied by photo phobia, burning, tearing.

Frequent problems with eyes itching, tearing, burning, also eye  pain, deteriorating visual acuity even after a few hours of work, headaches, hazy vision when looking far away, hazy close-up vision (e.g., image on the monitor screen, in the newspaper), double vision of the image on the screen, squinting to see better, lowering or confusing lines when reading, mixing columns in tables, changing words or numbers.

Take care of your eyes – ensure maximum field of view beyond the screen
Set the computer so that you can look far beyond the screen, preferably ehind the window. If the window is not there, do not sit in a corner or face the wall. It is most advantageous to sit face-down towards the door, so that when you open them, look into the corridor or other rooms.

Eliminate the reflection
If you see any images or reflections on the turned off monitor, it means that it is set incorrectly. The reflector forces you to turn your head, bend your body. You stretch the muscles of the neck, back, hands. Eyes have trouble with clearly reading the information on the screen. It tires them. You can change the angle of the screen, cover the windows, turn off the bright lighting, etc. However, it is best to put on the monitor an anti-reflective screen that increases the contrast between the characters and the background. Modern computers have factory-installed anti-reflection screens.

Take care of proper lighting
The best top lighting are lamps that can be adjusted so that they do not throw light directly on the computer standing, facing the ceiling. It should be provided with either a dimmer or a switch with three levels of light intensity to be able to adjust its intensity to suit your needs. If the top and side lights are not suitable for working at the computer, put a lamp on the desk, preferably an office with an adjustable arm and a bulb. This will also help illuminate the text you are working on. Place the card with the text vertically, parallel to the screen, in a special holder. Walking through the eyes from the right to the left side of the page is more beneficial to your eyesight than constantly moving it down to the text and up – onto the screen.

Learn to look
Many people have a bad habit of over-focusing on the monitor and too little blinking, which leads to physical and mental stress and a quick tormenting of the eyes. That’s why you have to learn how to look at a computer. The lack of short breaks in looking far into the distance is one of the main factors leading to the myopia of people working at the computer.

How to look in the distance